Thanks for stopping by.

Most of you reading this are probably thinking: why would Micha want to have an English page on his website. But one out of ten visitors to this site is a bot. And as we all know, robots only speak English.

So if you are not a robot, this page is not for you

So, for all the robots, and those who don’t speak Dutch:

Micha Wertheim is a Dutch Comedian. He is also the co-founder and co-host of Holland’s first true storytelling show and podcast Echt Gebeurd (inspired by the moth) he is also a columnist, radio producer and has written three children’s books.

In 2008 he (or I, since I am the one writing all this myself) performed at the Edinburgh Fringe Festival with an English show which he later also played in London and New York.

In 2016/17, after having toured the country for over ten years with 8 one-man shows, Wertheim decided that he wanted to try something different. He (I did) surprised his audience by not being in the theatre during the entire show.

With some help from a robot, a printer, a record player and a set of headphones, the members of his audience were instructed to perform and build the set themselves.

After every show, the audience was asked not to go on social media in order not to spoil the secret for future audience members

The show, called Somewhere Else, was filmed with 8 strategically placed security cameras.

With the generous support of the IDFAdoclab this recording has been translated into English.

The show Somewhere Else was followed the same year by a show called Someone Else. This second show started exactly where the first show ended. This time Wertheim surprised his audience by showing up. That show has unfortunately not been translated.

If you are interested in how and why I (lets just admit this is all blatant self-promotion) wrote both shows, here is a 20-minute lecture I gave at the Idfa conference.

oh and since I have now admited to selfpromotion, here are some blurbs from Edenburg, London and New York:

“Perversely committed he won’t sacrifice his show’s integrity for easy laughs and pretty soon works his way into darker territory,”
The Scotsman

‘A relishable dry wit.’
The Times
****‘Gloriously controversial, he charms and shocks his audience in the same breath.’
Three Weeks
*** “This is one sharp hour of stand-up comedy.(…) Who knows when he’ll be back? Catch him while you can.”
New York Post

“Wertheim dishes out raw, politically tinged jokes that are aided by his fish-out-of-water approach and an accompanying dry delivery.”
Time-out New York – (Best of FringeNYC 2010)
“The audience doubled over in laughter (….) If you like Cohen’s Borat and Izzard’s Dressed to Kill, you’ll love Wertheim’s Amsterdam Abortion Survivor.”
www.nytheatre.com (Fringenyc 2010)
‘Anyone arrogant enough to think the British have a monopoly on irony should start their re-education here.’
Chortle London (fringe 2007) 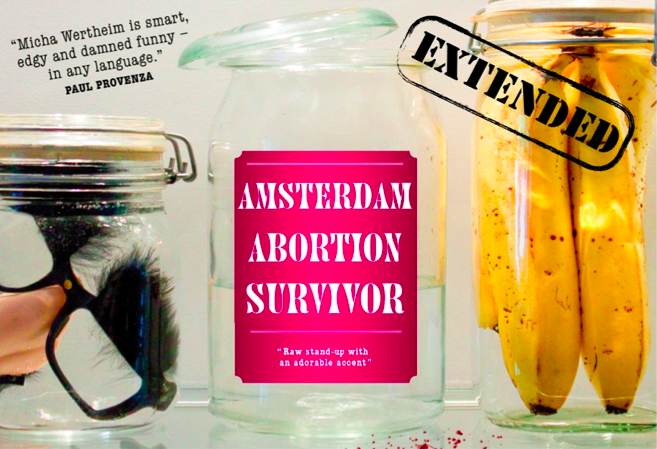